US Court of Appeals for the Federal Circuit & Federal Appeal Lawyers 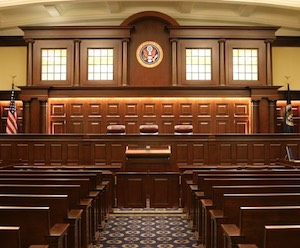 At Watson & Associates, LLC, with law offices in Washington DC and Colorado,  our federal appeal lawyers offer legal services to government contractors and small businesses who are doing business with the federal government.

As federal contractors, you may often find that you received an unfavorable ruling from either the U.S. Court of Federal Claims, ASBCA, CBCA or some other lower trial court. Unfortunately, lower courts do commit a legal error that sometimes can be reversible if you can catch the error in time to meet the appeal deadlines. By bringing your case to the United States Court of Appeals for the Federal Circuit (CAFC), you can show why your case was wrongly decided.

Whether you are appealing a bid protest decision from the U.S. Court of Federal Claims, a Contract Disputes Act case from ASBCA or Civilian Board of Contract Appeals, or a small business adverse decision, our United States Court of Appeals for the Federal Circuit lawyers can help.

Different Level of Skill Required Than at Trial Court

Compared to the United States Supreme Court, Federal appellate practice at the U.S. Court of Appeals for the Federal Circuit demands a different level of thinking skills and analysis than those involved at the lower court. As the party appealing the case, it is important to fully understand that this level of appellate practice is not in place to retry the case. Instead, filing an appeal requires a more narrow analysis of finding error through carefully critiquing the trial court record to see if the court committed reversible error.

Government Contracting and Types of Appellate Cases We Litigate

Our experienced trial attorneys and federal appeal lawyers represent our procurement and government contract clients in complex litigation matters including:

How Do We Move Forward in Representing You?

After you decide to file an appeal at the Federal Circuit Court of Appeals, our government contract appellate attorneys start by developing the critical issues for appeal, we also then conduct the legal research to apply prior rulings to the facts in your specific case. In federal government contracting, there is also a myriad of regulations that are highly relevant and must also be reviewed.

A commonly missed consideration by contractors is the importance of rule-making and procurement policy considerations required to be prepared for questions posed by the circuit court judges.

At Watson & Associates, the goal of our federal circuit court appeal lawyers is to develop a sound and persuasive appellate brief for submission to the court. Unfortunately, this takes a considerable amount of time and effort.

Drafting an appellate brief is the bedrock of your appellate case because the judges will review and discuss the briefs internally. The brief will also set the tone for the credibility of the lawyer and also create questions from the circuit court judges.

The bedrock of litigating a case at the United States Court of Appeals for the Federal Circuit is to be prepared for oral argument. A panel of three judges will preside over the oral argument hearing.  In a government contract and federal procurement appeals case, there can be a series of questions posed by the judges. Therefore, the time and effort that goes into representation and legal preparation is substantial.

With regards to the process of preparing for oral arguments, the response must be filed by each counsel who will argue on behalf of each party in the case. The principal counsel in the case must sign the response.

To be effective at the oral argument stage, our federal appellate lawyers understand that the focus must be balanced between answering the judges’ questions in addition to making any adjustments to pursued the court that your position best reflects that law and more importantly the court ruling that the lower court has in fact erred in its decision.

When it comes to circuit court appellate practice, Watson & Associates has extensive experience counseling government contractors and small businesses nationwide and overseas on how to address appeal cases at the Federal Circuit Court and how to navigate through the appellate process.

As Federal Court attorneys, we frequently practice at the various courts that hear issues pertaining to federal contracting and SBA small business issues as well as bid protest appeal cases from the Court of Federal Claims.

What is the Legal Standard of Review for the U.S. Court of Appeals to Hear Your Appellate Case From the Court of Federal Claims?

As federal appeal lawyers to the federal circuit courts,  we understand the substantive areas and united states Circuit Court of Appeals for the Federal Circuit rules involved in federal procurement including bid protests, Contract Disputes Act, the Court’s jurisdiction and disputes regarding claims and small business matters.

As your appellate attorney, our goal is to keep cost down while developing a strategic plan of action that can convince the federal circuit court judges to rule in your favor. Contact one of our lawyers today

If you are a federal government contractor and have recently received an adverse decision from the Court of Federal Claims (COFC); ASBCA or CBCA, call the US Court of Appeals for the Federal Circuit law firm at Watson & Associates, LLC.  As federal appeal lawyers,  we put together teams that can pursue the complex legal issues involved in federal procurement litigation.

For immediate help from one of the top appellate law firms for government contracting, with appealing bid protest, contract claims or other procurement case to the US Federal Court of Appeals, call our CO and Washington DC government contracts federal circuit court of appeals lawyers at 1-866-601-5518. FREE INITIAL CONSULTATION.

SAVE & ACCEPT
For More Information Call Us Today
error: Content is protected !!