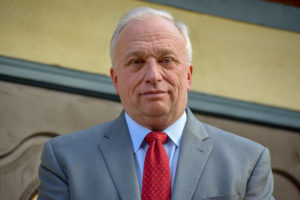 John Scorsine is “of counsel” with Watson and Associates, in addition to being the managing member of the Kanthaka Group. His primary focus is on assisting small and mid-sized businesses develop the potential of federal government contracting. He also practices general business law; military law; criminal law; and, a variety of administrative issues.

Mr. Scorsine was a partner with ArcherBay, P.A. of Denver. Previously, he was “of counsel” with Holland and Hart, LLP, where he concentrated his practice in government contracting. He has negotiated contracts and other agreements within both governmental and private sectors and is knowledgeable of FAR and DFARS procurement law regulations, as well as having experience in Federal SBIR and STTR programs.

Prior to joining Holland & Hart, Mr. Scorsine was Vice President, Secretary and General Counsel for 21st Century Systems, Inc. 21CSI is a research and development technology company that focused on solutions for decision support systems to the Department of Defense.

Twice named to the Inc. 500 and with offices during his tenure in nine states, 21CSI was highly successful with annual revenues of just under $20M. There he managed intellectual property issues and negotiated contracts and other agreements, as well as being responsible for risk management and legal compliance of the corporation. He was an integral member of the C-suite and overall corporate management.

Previously, he was a senior associate with DFI-International, where he served as the lead contractor/program manager on-site at U.S. Northern Command and was the subject matter expert on the law of Defense Support to Civilian Authorities. For eight years prior to that position, Mr. Scorsine was the Plans, Operations and Military Support Officer (POMSO) for the Wyoming National Guard. As the POMSO, Mr. Scorsine was responsible for the Wyoming National Guard’s response to disasters and emergencies. He was also responsible for the administration of the full range of intelligence and security programs involving the Wyoming Army National Guard. This included physical, communication, personnel and operational security, together with anti-terrorism efforts. He completed the Amphibious Warfare Course, the Army Command and General Staff College and the Air War College.

Mr. Scorsine is admitted to practice in:

From 1984 to 1995, Mr. Scorsine was engaged in a private law practice in Rock Springs, Wyoming. His practice centered on bankruptcy, domestic relations, commercial practices and criminal defense. Mr. Scorsine also served as a District and County Court Commissioner and a municipal judge in both Rock Springs and Bairoil.

A recently retired member of the Colorado National Guard, he held the rank of Lieutenant Colonel in the Army Judge Advocate General Corps and was qualified as a military judge. His last assignment, which he held since 2003, was with United States Northern Command. In this role, he provided legal advice concerning Defense Support of Civilian Authorities and National Guard capabilities and utilization,  prepared ethics opinions for the Command on domestic intelligence issues, and provided legal assistance to members of the National Guard. John has been certified as a military judge and as a DoD Ethics Counselor.

John has served as a Board member of both governmental, profit and non-profit organizations. These have included: Youth Home, Inc.; Sweetwater County Community Corrections Board; Liberation Prison Project, Inc.; Bona Fide Conglomerate, Inc.; the Mystic Buddhist Dharma Temple; El Paso County Emergency Service Agency Board; and, the Wyoming Board of Parole.

Mr. Scorsine’s other community activities involve service as a volunteer firefighter and emergency medical technician (EMT-I) with the Ellicott Fire Department. He holds various certifications in emergency management, HAZMAT, firefighting, public safety diving, and emergency medical services. He frequently presents on legal topics related to law and ethics of emergency services. He is a past Wing Commander for the Civil Air Patrol (Wyoming); had been a long time member of the National Ski Patrol; and, a highly qualified search and rescue team member.

John was ordained as a Buddhist Minister in 2009 through the International Order of Buddhist Ministers and the Los Angeles Buddhist Union. He serves as a volunteer, associate, chaplain within the Colorado Department of Corrections and has held that position since 2010. He is the only Buddhist Chaplain in the State of Colorado and a member of the American Correctional Chaplain’s Association.

Mr. Scorsine holds a B.S. in Criminal Justice and a Juris Doctorate, the later from the University of  Wyoming. He was awarded a Master’s of Arts degree, with distinction, from the University of Sunderland (UK) in the field of Buddhist Studies. His original research included in-depth interviews with leaders of the Tibetan Government in Exile to include His Holiness the Dalai Lame.

For More Information Call Us Today
error: Content is protected !!